We are very thankful to The Japanese paperplace for all this knowledge and photos.

Paper was originally made in China in the first century AD. The art was brought to Japan in 610 AD by Buddhist monks who produced it for writing sutras. By the year 800, Japan's skill in papermaking was unrivalled, and from these ancient beginnings have come papers in an  unbelievable range of colour, texture and design. It was not until the 13th century that knowledge of papermaking reached Europe – 600 years after the Japanese had begun to produce it.

By the late 1800s, there were in Japan more than 80,000 families making paper by hand. Then, with the introduction of mechanized papermaking technology from Europe, and as" Western" things became sought after including curtains (not shoji) and French printmaking papers (not kozo), the production of Japanese paper declined so much that by 1983 only 479 papermaking families were left. Today the few remaining families struggle to compete in the world market with handmade paper from India, Thailand and Nepal, where a lower cost of living makes it possible to produce paper more cheaply.

Kozo (paper mulberry) is the most widely used, has the longest fibre, and makes the strongest paper. It is grown as a farm crop, and the branches are cut annually. The plants will regenerate continually for about 40 years.

Mitsumata has a softer, shorter fibre, with a warm tone. While it is also grown as a crop, mitsumata takes 3 to 5 years to regenerate and thus makes a more expensive paper.

Gampi was the earliest plant used and is considered to be the noble fibre, noted for its richness, dignity and longevity. It has an exquisite natural sheen, and is often made into very thin tissues. Gampi has a naturally 'sized' finish which does not bleed when written or painted on. Gampi resists cultivation and is mainly harvested in the wild. It is increasingly difficult for papermakers to acquire Japanese-grown gampi.

Other fibres such as hemp, abaca, wood pulp and rayon are sometimes used for papermaking or mixed in with the other fibres.

Tororo-aoi is the root of a species of hibiscus. When pounded and soaked in water it exudes mucilage which is used as a formation aid in sheet forming.

Noriutsugi is a type of hydrangea that is also used as a formation aid. 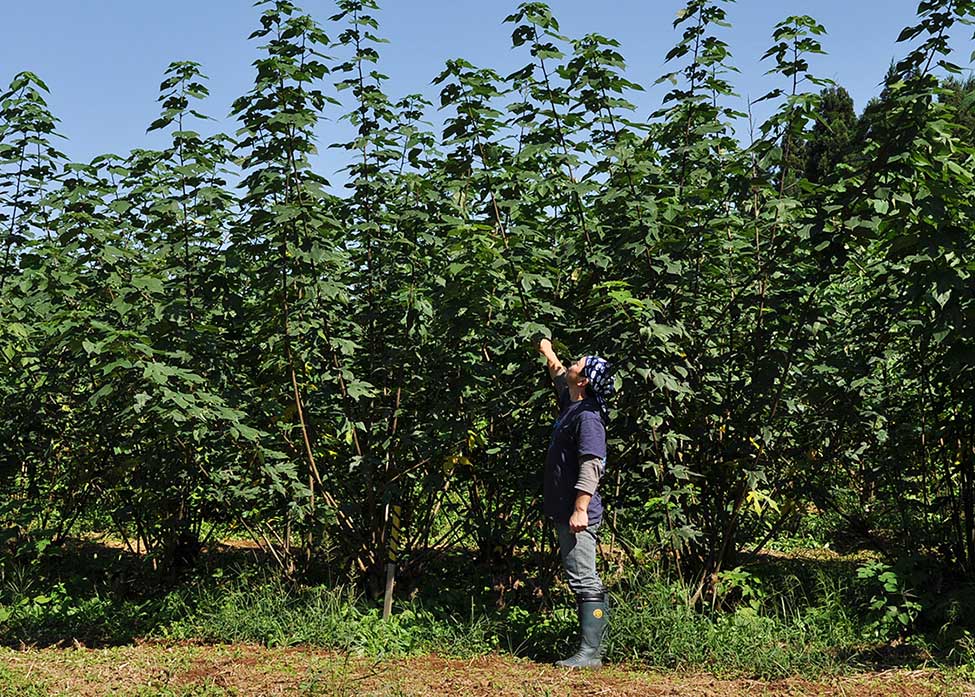 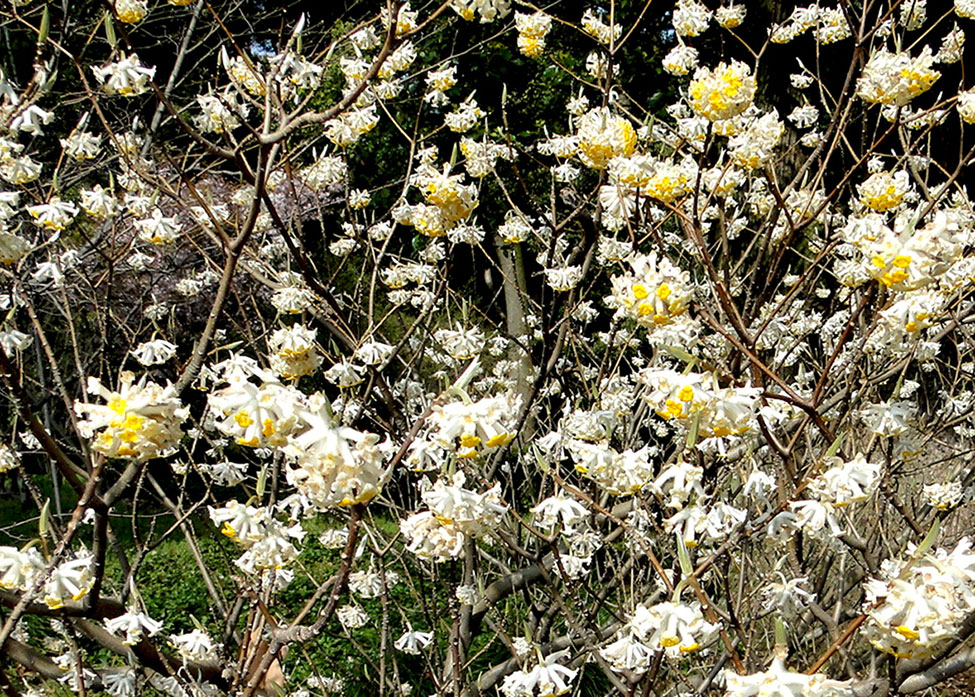 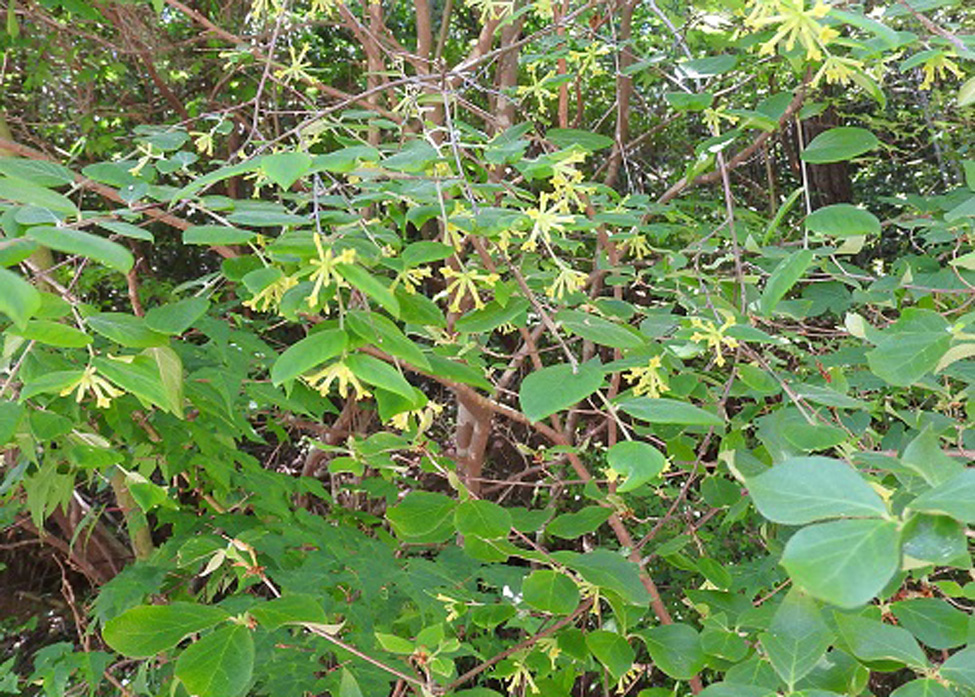 Careful preparation of the fibre for sheet-forming is the key to the quality of the final paper. The method for the three fibres is quite similar, but here we will only focus on kozo washi, prepared in the traditional manner.

Branches of the kozo bush, which have been pruned throughout the growing season, are harvested, cut to uniform lengths and steamed for several hours to loosen the outer bark from the wood. While the steamed branches are still warm, the brown outer bark and two layers of inner bark — the portion used to make washi — are removed from the core. At this point the fibre may be dried for later use or be further prepared. The core is dried and used for firewood or local crafts. 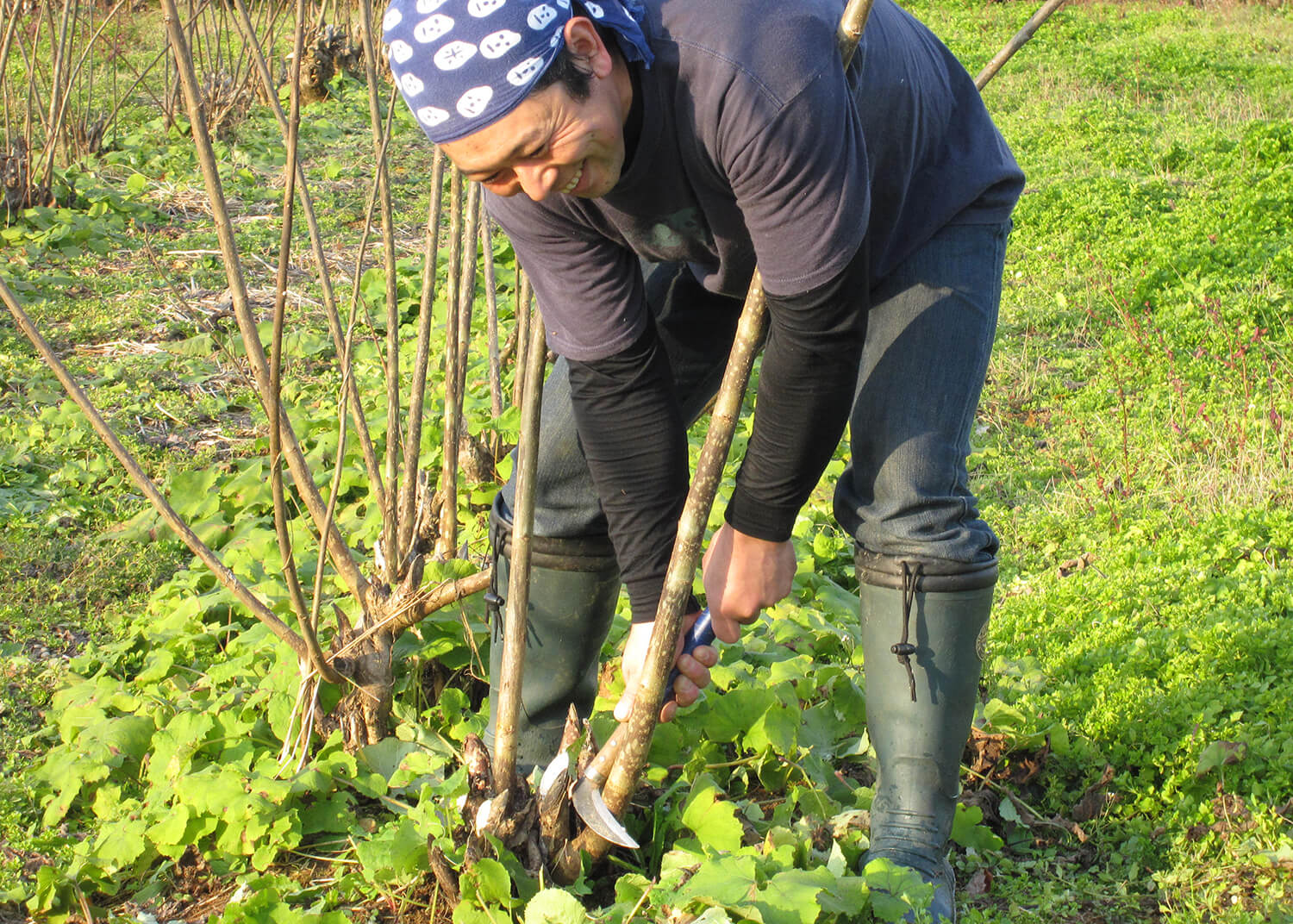 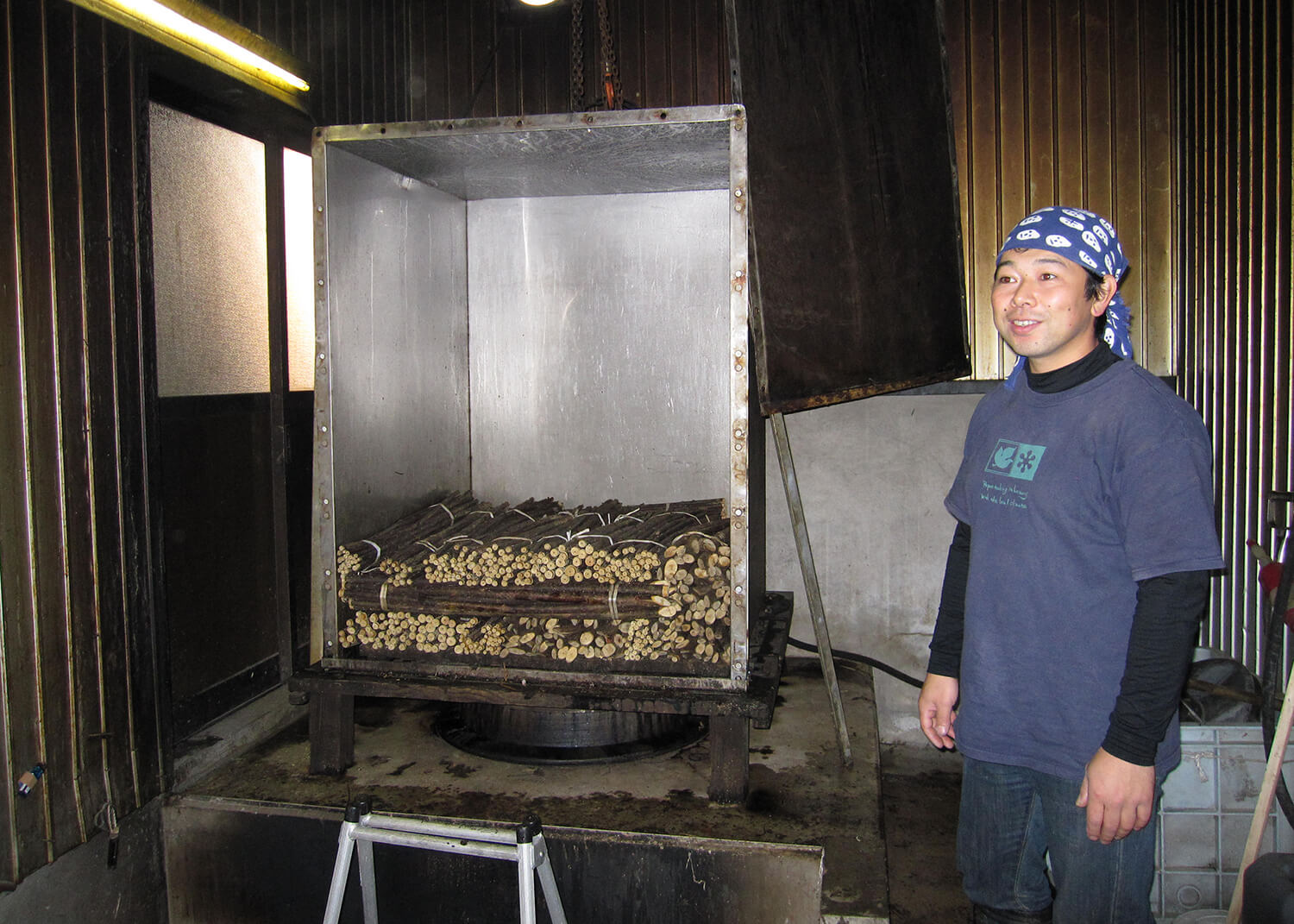 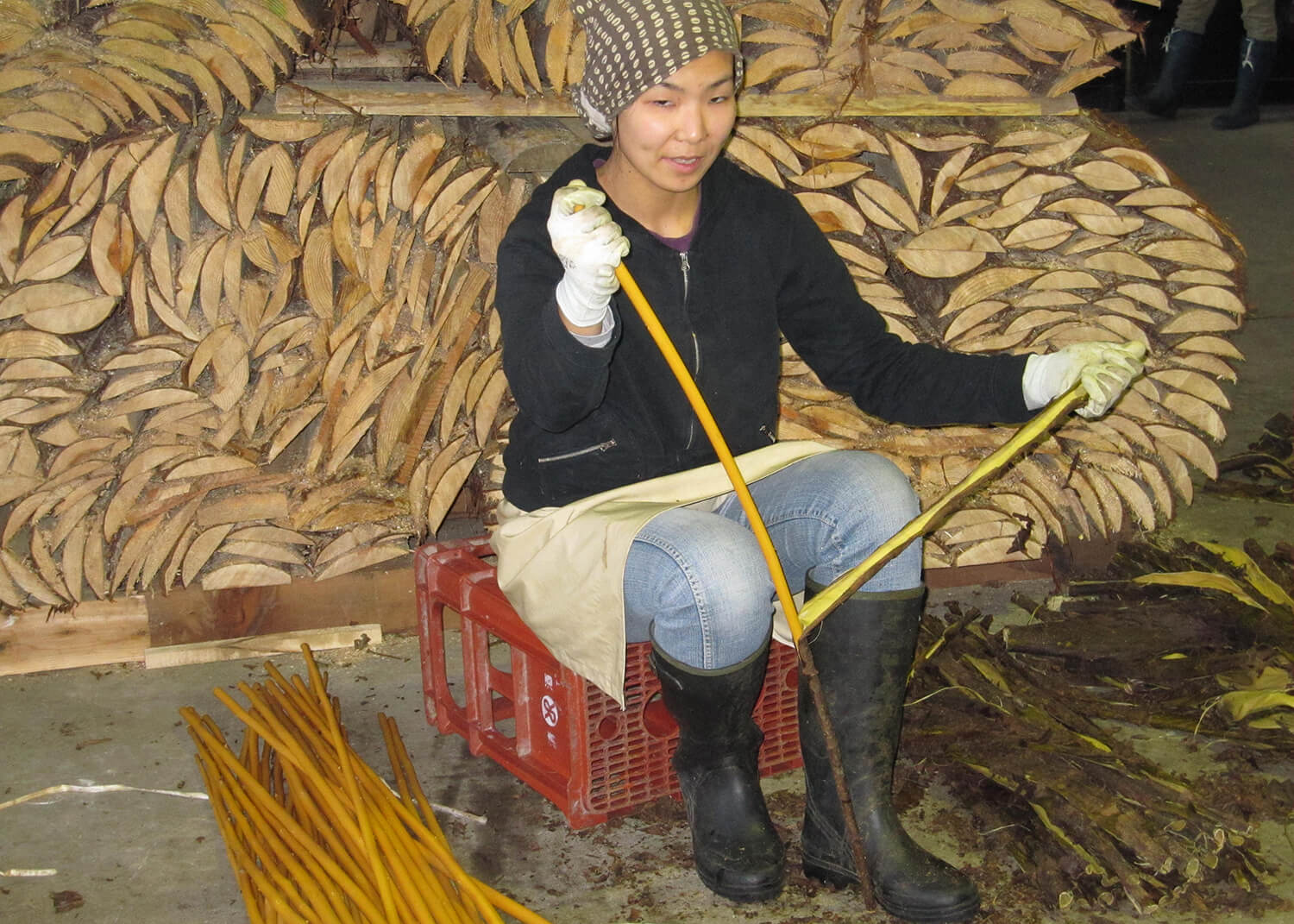 The fibre is first soaked, and the brown outer bark is then laboriously scraped away from the lighter inner fibre with a special knife. The middle green layer of bark (rokubu-heguri) is often removed as well, or it may be left on to produce a more toned paper. This scraped fibre is then washed in running water.

To make the strongest, archival washi, the washed kozo is cooked for several hours in water mixed with an alkali of wood ash, soda ash or lime to help the fibre to break down. This softens the fibre slowly, retaining its strength. The fast, modern method is to cook the fibre in caustic soda. The cooked fibre is washed yet again to rinse out the alkalai. 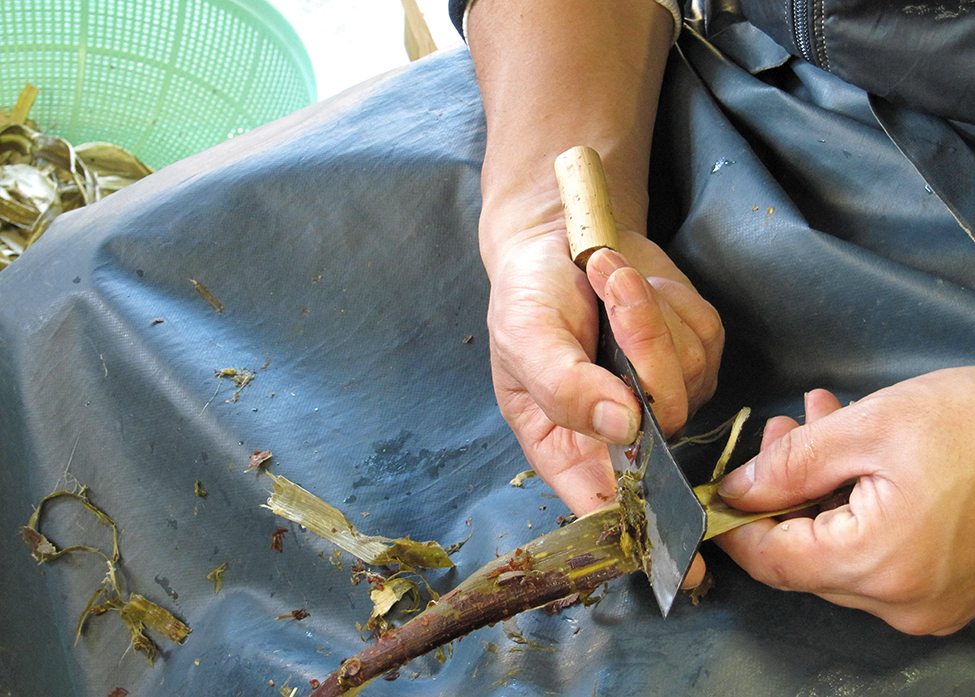 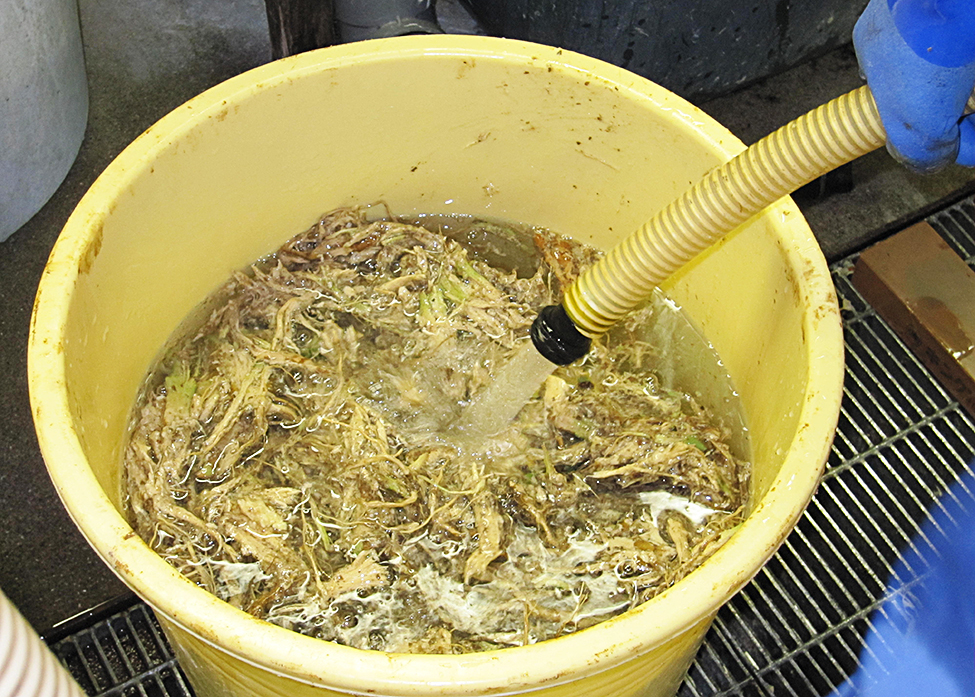 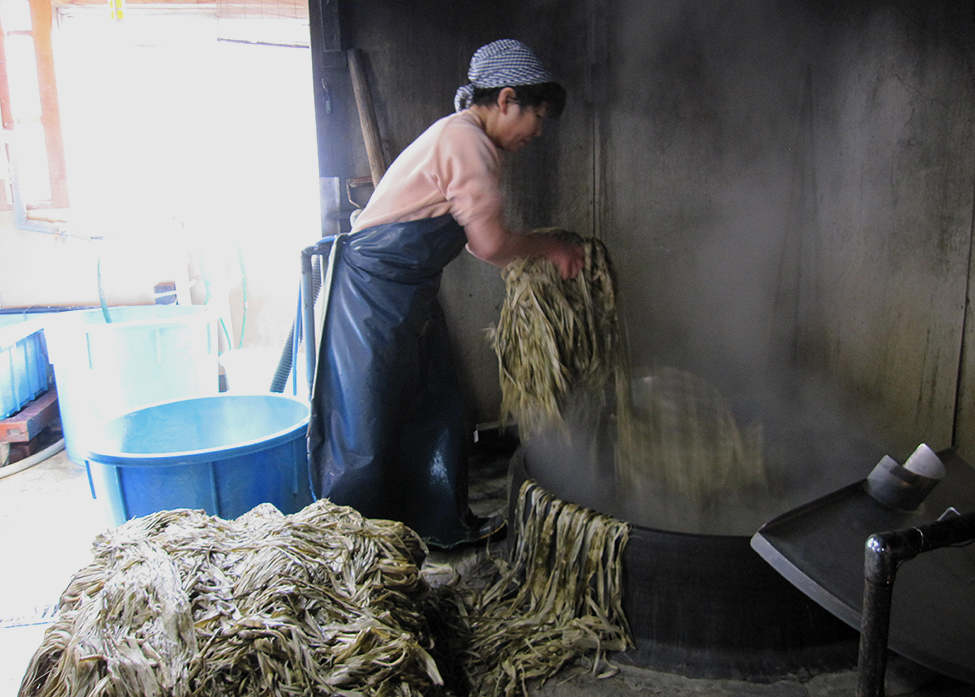 It is at this point that the fibre is bleached by some method, if required. In mountainous areas where snow is abundant, the fibre is laid out on the surface of the snow to bleach in the sun and its reflected light. In areas with little snow the fibre may be laid out in a stream to let the water gently wash it and magnify the sun’s natural bleaching action. The fast, modern method is to use chemical bleach. 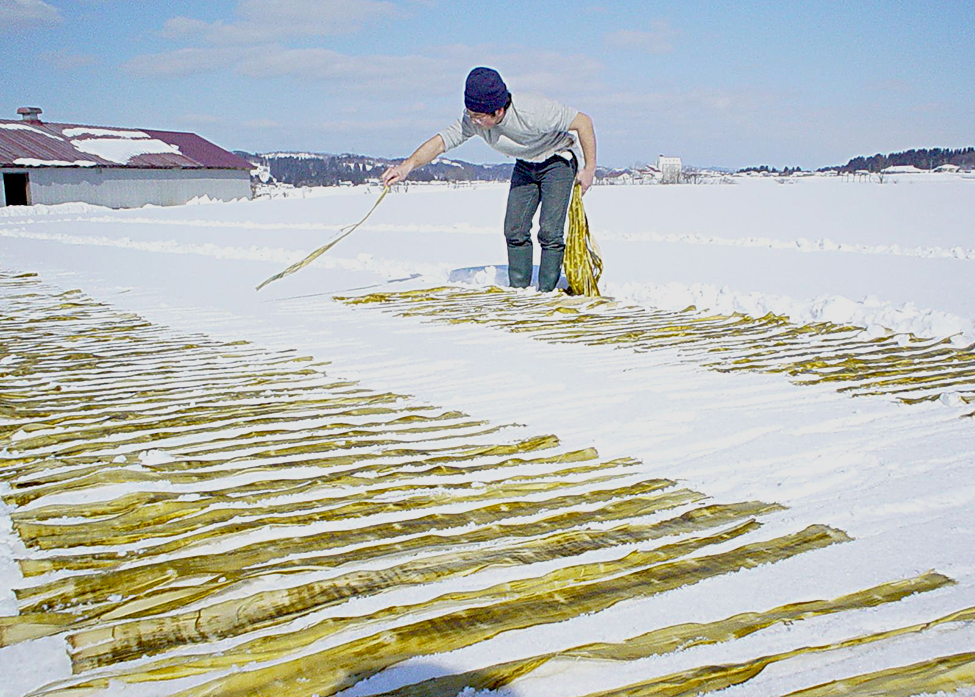 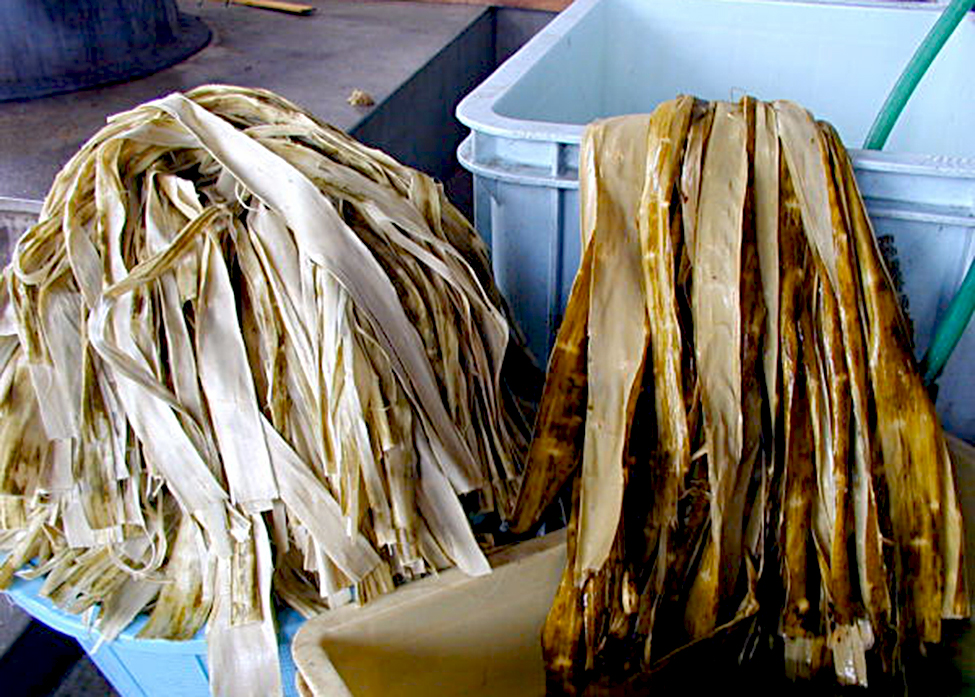 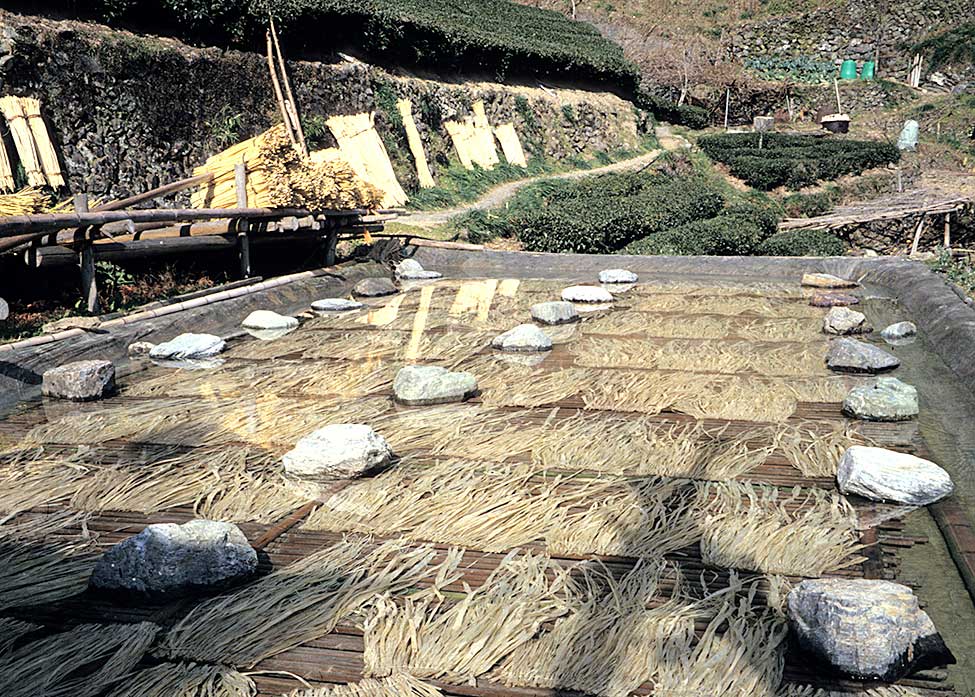 The cooked fibre is then beaten to separate the strands in preparation for sheet-forming. Hand-pounding the fibre is rare these days: mechanical beaters of various kinds are used. After beating, any last bits of bark or knots of fibre are carefully picked out by hand in a process called chiri-tori.

The pounded fibre is added to a vat of water which has been thickened by the addition of neri, a mucilage derived from pounded roots of tororo-aoi (hibiscus) or noriutsugi (hydrangea). The resulting slurry is vigorously stirred until the fibre is evenly distributed. A mesh screen, called a su, is placed in a frame, a keta, and then repeatedly dipped into the vat to build layers of fibre to form the sheet. The slow drainage of water through the su, brought about by the thickening action of the neri, allows the maker to rock the screen back and forth and side to side, evenly spreading the kozo fibre to create strong sheets of washi.

The wet sheets are piled one on top of the other as they are formed. When completed, this stack is slowly pressed to expel the water. The still-damp, pressed sheets are then individually peeled from the stack and brushed onto a smooth flat surface to dry. The traditional drying surface consists of wooden boards which leave a slight woodgrain impression on the surface of the sheet. Heated stainless-steel dryers are now commonly used and are a modern adaptation as large wooden boards are hard to come by now. 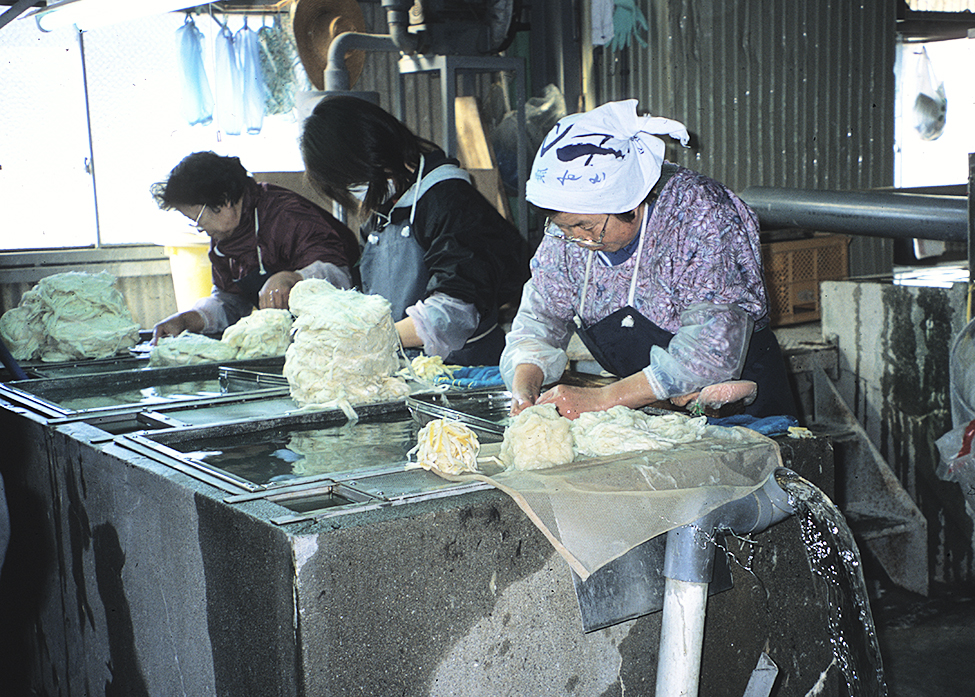 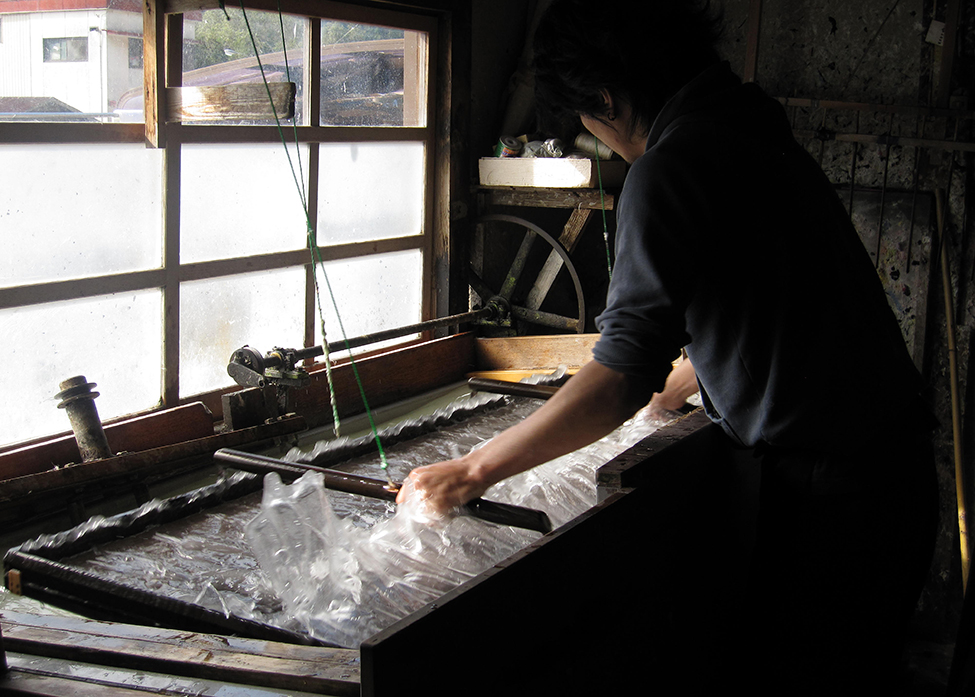 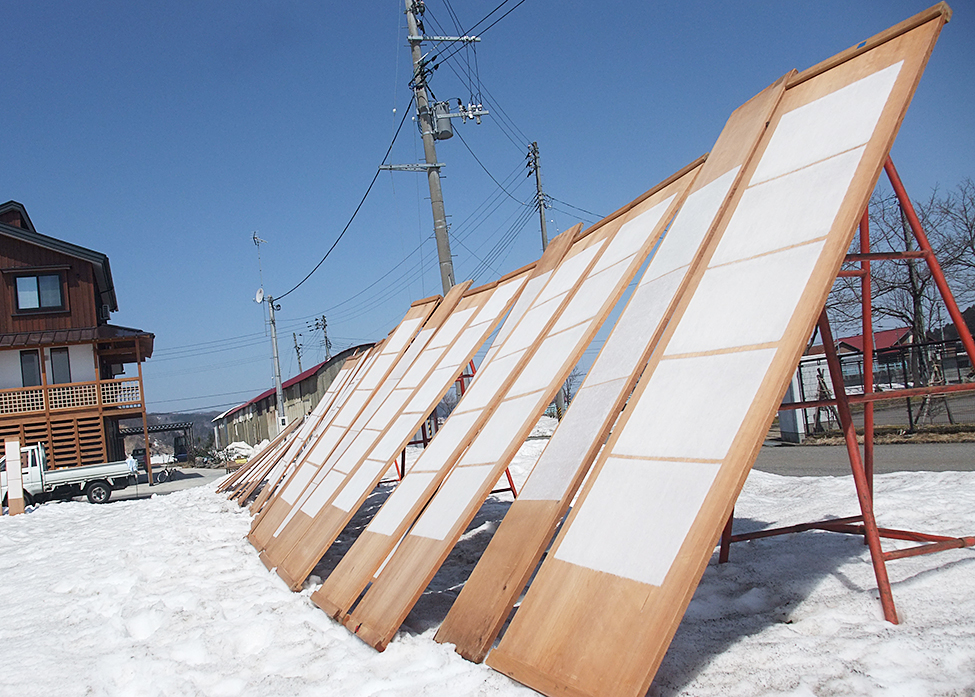 In order to distinguish the papers traditionally made and of the highest quality for both conservation and artistic use, we use the term Heritage Washi. To be named this way, the paper must be:

Although not technically Heritage Washi because they are made by machine, papers made at Kashiki Paper Mill in Kochi are of the highest quality. There, they use only Japanese fibres, prepare them by hand, and their special, slow-moving machine replicates the movement of the hand-papermaker’s screen, producing very even paper.

The practise of conservation demands the qualities of wet strength and even distribution of fibre in the papers used to ensure workability and longevity. Heritage Washi has these qualities. Artists who use Heritage Washi also know their works will last hundreds of years and appreciate the cooperative nature of working with it. The continual usage of Heritage Washi helps to ensure the ongoing production of this important resource.

While the committed and talented papermakers persevere in producing  uncompromised paper, they do face some challenges: 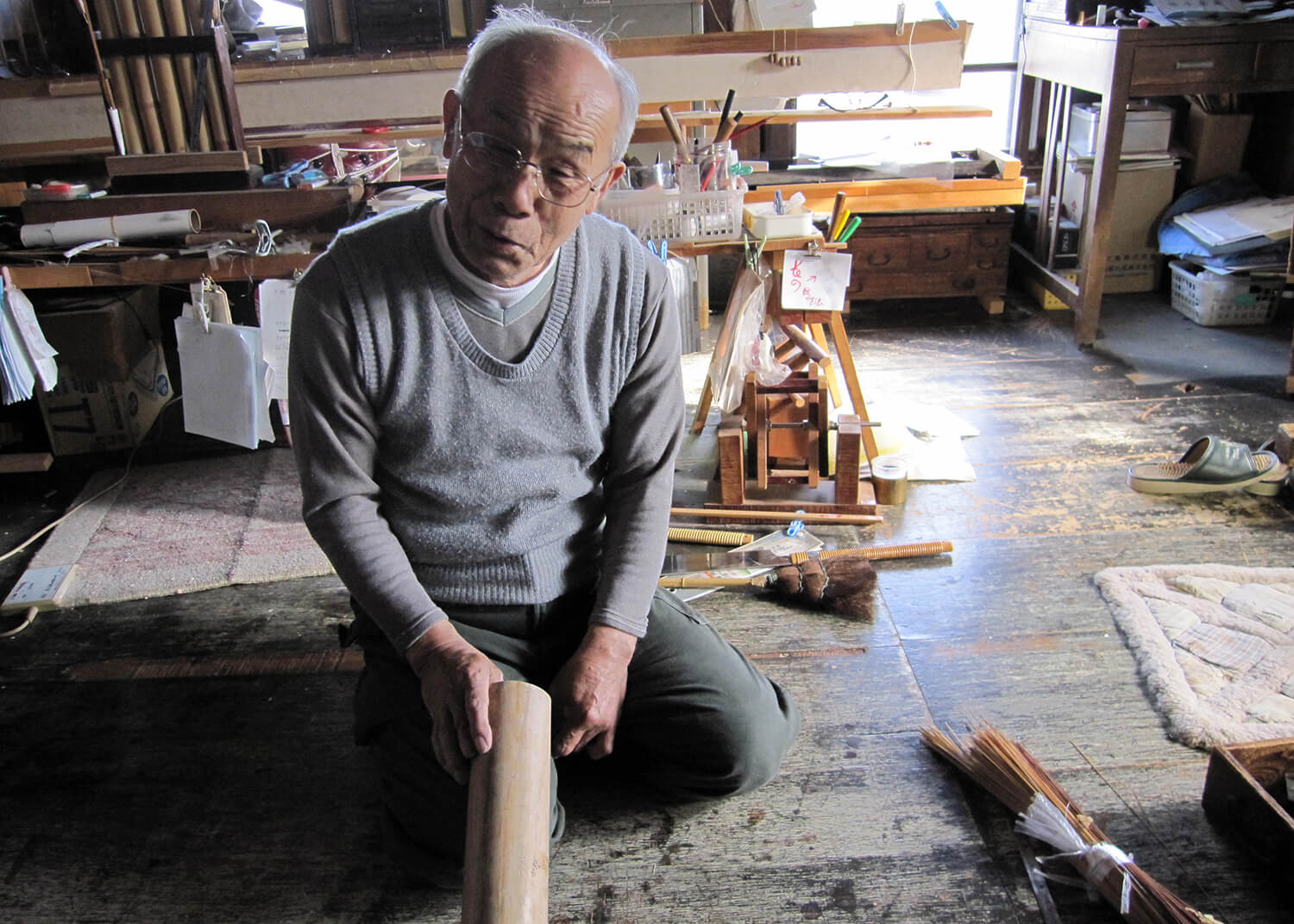